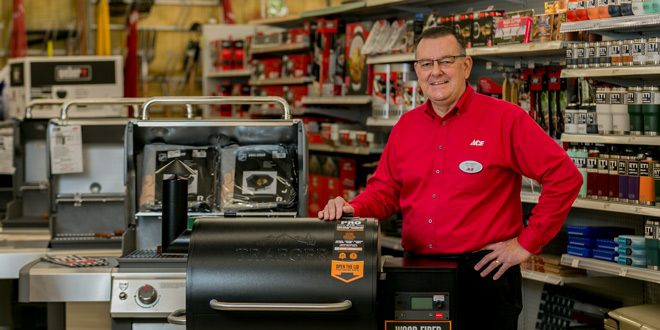 Dan Harris has accomplished a tremendous amount in the independent home improvement industry for a man who sought a hardware store job just to work his way through college.

Decades later, Harris now oversees two thriving retail businesses and is serving in his second term as chairman of the board of directors for the industry’s trade association, the North American Hardware and Paint Association (NHPA).

He owns Palos Ace Hardware and Lemont Ace Hardware, two suburban Chicago stores, with his wife Pattie. The stores provide essential goods and services to residents and businesses in their communities and have given the Harrises countless opportunities to serve their neighbors and actively support organizations locally and across the country.

Harris’ connection to the hardware industry started when he needed a job while pursuing a business degree at a small local college. During his sophomore year, he began working as a sales clerk at Park Ace Hardware in Tinley Park, Illinois.

“We’ve grown, recovered and continue to take our business to the next level.”

After being away from the hardware industry for a while, Harris and his wife aspired to own a hardware store. Fortunately for them, there was an Ace Hardware store for sale in their hometown with an owner looking to retire quickly.

After careful consideration, Harris quit his job with the manufacturing company and his family bought their first store in Orland Park, Illinois.

Rising Above It
The Harrises’ first home improvement store, Orland Park Ace Hardware, was both a shining success aand an eventual disappointment. Upon purchasing their new hardware store, Harris and his wife spent countless hours optimizing their new business.

“We redid the store from top to bottom and expanded the retail selling space. New fixtures and additional merchandise were added to attract new customers,” Harris says.

The hard work proved effective and their store was thriving.

“Within about nine months, we almost tripled what the store was doing in sales when we bought it. It became our launching pad,” Harris says.

In 2003, six years after purchasing their first location, the Harrises bought a second promising store in nearby Palos Heights and began to renovate once again. Business was going well in both stores when Harris and his wife found themselves facing an eminent domain lawsuit from the city that threatened to shut down their Orland Park location.

“We were taking a business we had put our heart and soul into and being forced to shut it down when there was no business reason to close,” Harris says.

After engaging in many legal hearings, the Harrises realized they could lose far more than their store by continuing the legal engagements, so they consolidated their business into the Palos Heights location.

Although their disappointment was deep, they remained steadfast in their ability to run a successful family-owned business. 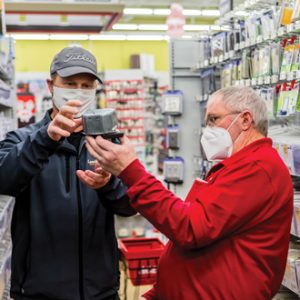 SAFE SERVICE
Keeping employees and customers safe during the COVID-19 pandemic, while continuing to provide the essential goods and services local residents and businesses need, is important to store owners Dan and Pattie Harris and their teams at Lemont Ace Hardware in Lemont, Illinois, and Palos Ace Hardware in Palos Heights, Illinois.

Pressing On
After closing the Orland Park store, the Harrises rethought their goals while continuing to grow business at the Palos Heights location. They chose to press forward, and in 2013, they opened a new store located within a brand new building in Lemont, Illinois.

“We’ve grown, recovered and continue to take our businesses to the next level. I’m proud of the success,” Harris says.

The Harrises currently operate a thriving business with two locations that employ a staff of 30 people and serve both of their communities in meaningful ways.

Harris is engaged in volunteering with numerous industry and community organizations. In addition to serving as chairman of the NHPA board, he has served as group leader and board member for the local Chicago Ace retail group.

Harris recognizes the importance of volunteer work. He donates his time to the Blackfeet Volunteer Medical Corps board, which provides needed health care and educational services to a Native American reservation in Browning, Montana.

In his own community, Harris works with a local organization that provides mental health and other medical services to people with disabilities while also serving on his church’s board and volunteering with the local Rotary Club and chamber of commerce.

Throughout the COVID-19 pandemic, both of Harris’ stores have remained open, providing essential products, such as protective face coverings and cleaning supplies, to local residents and businesses. The stores provide the smaller shopping space and local access customers want when social distancing.

The Harris children, Dan Jr., Meghan and Kaylee, grew up working in the stores and are invested in the family business. Meghan is a pediatric nurse and Kaylee is in college pursuing an accounting degree. Harris’ daughters both help with merchandising, fundraising and accounting work for the business. Dan Jr., who is a physician, recently did a cooking demonstration on grills at one of the family’s hardware stores. 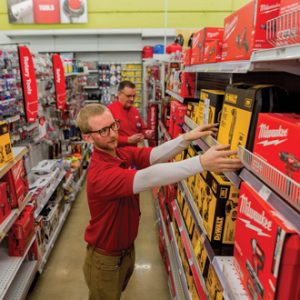 CLOSE-KNIT TEAM
Dan Harris (back) considers his staff to be like family. He and his wife Pattie work alongside their employees in the business and care about providing a safe environment for them to work in.

Looking Behind and Ahead
The Harrises’ first store was unfairly shut down, but they have worked through hard times and moved forward.

Harris and his wife are proud of the businesses they have built and the myriad ways they have been able to serve their communities. Harris plans to continue the success in the future.

“Maybe there’s one more store left in me,” he says. Right now, Harris and his wife’s main goals include safely running their stores through the pandemic and appropriately growing business in light of current challenges.

To Harris and Pattie, their staff is like family. They recognize the risks their employees face and maintaining a safe environment is of utmost importance to them.

In terms of business operations, the COVID-19 pandemic has changed customer demographics and purchasing habits. Harris has noticed that younger customers have been attracted to his two stores.

Customers are also browsing in person, searching for essential products. The pandemic has reinforced the necessity of shopping in a smaller, less-crowded environment within a hometown hardware store.

“We have learned, especially during pandemic times, that people are still shopping and they like to shop locally,” Harris says. “We’ve been rediscovered by a broader, younger audience.” 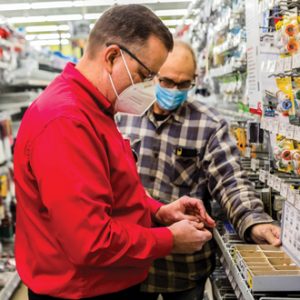 PERSONAL SERVICE
Dan Harris works inside his two stores, in addition to building the business and planning ways to grow it. Many customers have been loyal to the Harrises’ stores for years, including some shoppers who used to frequent their original store in Orland Park, Illinios.

Serving the Industry
Harris’ involvement with NHPA has provided opportunities for him to support other independent home improvement retailers.

He has served on the association’s board of directors since 2011 and gotten to know other independent operators throughout the industry.

Beyond the local communities his stores serve, he has found ways to support other retailers throughout North America. Harris is
now serving in his second term as NHPA board chairman, leading through a time of transition.

The North American Retail Hardware Association (NRHA) expanded its membership to independent paint and decorating retailers following the closure of the Paint and Decorating Retailers Association (PDRA) in September 2020. To formally recognize the expansion in membership, the association changed its name to NHPA.

TJ Comstock, a former NRHA board chairman, believes Harris is uniquely equipped to lead the association’s expansion to serve paint and decorating retailers.

“Dan has been a part of the association for several years and has been involved in some of our more recent, larger and more challenging transitions,” Comstock says. “He understands our mission as well as the vision of the management staff. Put these things together, couple them with his integrity and there is no better person for the job. You would be hard-pressed to find a more honest and solid individual than Dan Harris. He is undoubtedly a solid asset to our association and a well grounded leader.”

Harris is sold on the association’s mission of helping independent home improvement and paint and decorating stores become better and more profitable businesses. He believes NHPA can benefit other retailers in the ways it has helped him.

“Getting involved with this organization was one of the best business decisions I’ve made in my career,” Harris says. “It has helped me grow as a retailer. Plus, I’ve made a huge amount of friends in the industry who share a lot of the same problems and successes. We all have very similar operations, goals and pathways in getting there.”